The Tarangire Ecosystem in Africa is a global hotspot for wildlife, but most of the area is not protected. Scientists from Wild Nature Institute are conducting surveys of hoofed mammals (also called ungulates) throughout the ecosystem to provide scientific data for African wildlife conservation.

TUNGO is using science to conserve African wildlife by finding which populations are healthy and which are declining, determining why, identifying migratory connections, and pinpointing where rare species are located. We also use data to help rangers be more efficient and effective at protecting wildlife from poachers.
We need your help to save these wonderful animals. 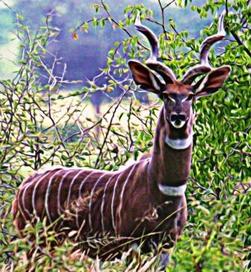 Lesser Kudu
Our TUNGO project is studying the population dynamics for 20 species of ungulate (hoofed mammals) in the Tarangire Ecosystem of northern Tanzania to provide reliable data for scientific management, wildlife conservation, and anti-poaching.

The Tarangire migration is one of only three long distance migrations of wildebeest (Connochaetes taurinus) remaining in Africa. The wildebeest population in the Tarangire Ecosystem of northern Tanzania decreased from an estimated 40,000 animals in 1988 to approximately 10,000 today. We used A multi-method approach to delineate and validate migration corridors for wildebeest to inform rangeland conservation and land use planning. Conserving landscape-scale migratory habitat for wildebeest will also protect important rangelands for Maasai pastoralists and their livestock.

Two papers explored the Ecological effectiveness of community-based Wildlife Management Areas (WMAs). In Tanzania, community-based natural resource management (CBNRM) of wildlife occurs through WMAs. The WMAs consist of multiple villages designating land and managing it for wildlife conservation in return for a portion of subsequent tourism revenues. In Randilen WMA, we documented significantly higher densities of resident wildlife (giraffes and dik-diks) and lower densities of cattle in the WMA, relative to the control site, indicating short-term ecological success. In a paper using data from Burunge WMA, we found greater densities of wildlife and lower densities of livestock inside the WMA compared with outside. After management changes, we documented significantly higher densities of several wild ungulate species and lower densities of domestic ungulates in the WMA. These combined results indicate the ecological effectiveness of Randilen and Burunge WMAs and provide evidence that CBNRM can have positive effects on wildlife populations, particularly when support to grassroots law enforcement is provided.

The Tarangire region, where WNI has been studying ungulates since 2011, hosts hundreds of thousands of people, millions of livestock, large mines, booming towns, two major tarmac roads, and a patchwork of agricultural fields—and yet still supports one of the most significant long-distance migrations of wildlife remaining in the world, much of it taking place on community land. It also is home to one of the most important populations of giraffes in Tanzania, and therefore in the world. Our book Tarangire: Human-Wildlife Coexistence in a Fragmented Landscape summarizes multidisciplinary work on wildlife conservation in the Tarangire Ecosystem and highlights practicable and locally adapted solutions for shaping human-wildlife interactions towards coexistence.

To survive, animals must find nutritious food and drinking water—sometimes during long dry seasons or cold periods—and at the same time avoid being eaten. Ungules are an extraordinarily diverse group of animals and are critically important in East African savannas. Yet they must compete more and more with humans for space in a fast-changing world while also evading hungry lions, leopards, and other natural predators. In Trophic processes constrain seasonal ungulate distributions at two scales in an East African savanna., we investigated the habitat needs of a community of ungulates in the Tarangire Ecosystem, and how vegetation, water, presence of humans, and risks from predators influenced their use of these habitats. The study highlighted the importance of food (vegetation) for all species, as well as nearness to year-round rivers for most but not all. Some species appear to be tolerant of human presence and even congregated close to cattle herder settlements, presumably because of lower predator densities there. We found that antelopes that ate both grass and woody-plant leaves allowed them to avoid areas with high human activity while meeting their dietary needs. Importantly, the presence and number of herbivores were sensitive to short and long-term variation in rainfall suggesting they are vulnerable to drought.
Our scientific publications from TUNGO: