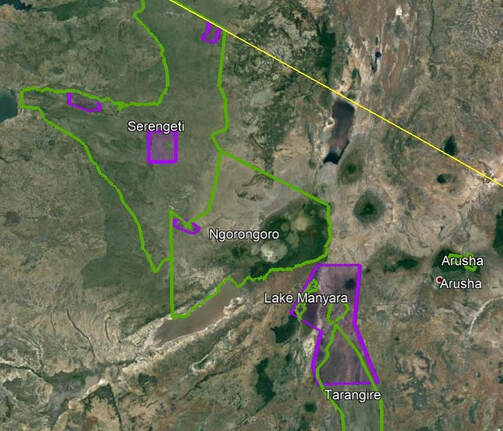 Purple areas are where we study the thousands of individual giraffes in the world's largest giraffe research program. Green areas are protected national parks, conservation areas, and conservancies.
Our giraffe research in the Serengeti Ecosystem is discovering where Masai giraffes are doing well, where they are not, and why. Wild Nature Institute scientists are studying wild Masai giraffes in Tanzania using a computer program that recognizes each animal’s unique fur pattern from photographs. We are monitoring more than 3500 individual giraffes throughout their lifetimes in an area over 25,000 sq. km. This is the biggest giraffe study in the world, and one of the biggest large-mammal demography studies in history. Our research supports communities working to protect and connect areas important to Masai giraffe conservation.


We're in Serengeti replicating a famous giraffe study first done in 1975-77 by Robin Pellew, replicated in 2008-10 by Megan Strauss, and now continued since 2018 by Derek Lee & Monica Bond. Using aerial surveys and ground-based data we will soon have a more than 40-year study of giraffes in Serengeti. These long-term ecological research programs are vital contributors to our understanding of how our planetary life-support systems work. 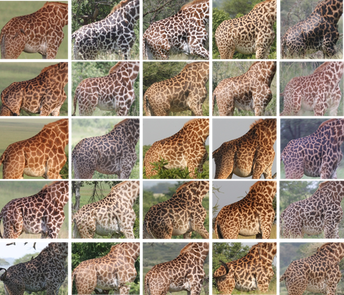 We are learning how natural and human factors affect giraffe demography and behavior in a landscape where wildlife habitat is increasingly fragmented by humans. Demography is survival, births, and movements, and these processes determine whether a population is growing or shrinking.

Our giraffe research is urgently needed so we can provide effective conservation actions in an ever more fragmented world, and ensure the future of wild giraffes and all creatures of the savanna.

We believe animal welfare must be a priority for scientists working to protect wildlife. All our methods are completely non-invasive. We collect photographs and dung without ever touching or interfering with the giraffes in any way. The life of a wild animal is very difficult naturally, and because of the global spread of humans and our influences, wild animals are facing ever more challenges as they lose habitat and are forced to interact with people and human-dominated landscapes more often. We strive to make sure our research has no negative effects on the giraffes we study.

We participated in the global status assessment of giraffes through the IUCN, and our research documented the effectiveness of community conservation and anti-poaching efforts. Wild Nature Institute scientists are affiliated with Pennsylvania State University, University of Zürich, and the Nelson Mandela African Institute for Science and Technology. We also collaborate with scientists from The USA, South Africa, Tanzania, the United Kingdom, and Switzerland.

Learn more about our Giraffe-Themed Conservation Education, and Children's Books, and Fun Giraffe Facts.
What you can do to help save giraffes.
Your tax-deductible donation or adoption of a baby giraffe will help to conserve giraffes for future generations.

View A Video About Our Giraffe Conservation Work

Precision, accuracy, and costs of survey methods for giraffe Giraffa camelopardalis was one of our first publications from the project. We estimated giraffe density and abundance in the Tarangire Ecosystem in northern Tanzania using two ground survey methods—distance sampling and capture-mark-recapture—and compared our ground-based estimates with those from the most recent aerial survey. We found aerial survey estimates were biased low, while ground-based surveys were more precise and cost less. However, aerial surveys are useful over large regions of Tanzania and thus can provide landscape-scale population estimates. We computed correction factors to improve the accuracy of aerial surveys and suggested ways to further improve aerial survey methods.

Our two papers about Giraffe Skin Disease (GSD), The occurrence and prevalence of giraffe skin disease in protected areas of northern Tanzania, and Soil correlates and mortality from giraffe skin disease in Tanzania described the disorder in the Journal of Wildlife Diseases. We documented that GSD prevalence was best explained by soil fertility, with less disease prevalence on more fertile soils. We found no mortality effect of GSD on adult giraffe in Tarangire National Park. Based on our findings, GSD is unlikely to warrant immediate veterinary intervention, but continued monitoring is recommended to ensure early detection if GSD-afflicted animals begin to show signs of increased mortality or other adverse effects.

In Spatial variation in giraffe demography: a test of 2 paradigms, we examined whether spatial variation in demography of a tropical mega-herbivore (the giraffe) followed the “temporal paradigm” or the “adult survival paradigm” of ungulate population dynamics that were formed from temperate-zone studies. We quantified how giraffe demographic rates of survival and reproduction varied across space at regional (northern Tanzania) and continental (Africa-wide) scales. Spatial variability of demographic rates at the continental scale supported the temporal paradigm of low variability in adult survival and more highly variable reproduction and calf survival. In contrast, at the regional scale, adult female survival had higher spatial variation, which supported the adult survival paradigm. At both scales, variation in adult female survival made the greatest contribution to variation in local population growth rates. We also found human-caused reductions in adult female giraffe survival are the most likely reasons of population declines.

In Migratory herds of wildebeests and zebras indirectly affect calf survival of giraffes, we utilized our data about a large-mammal predator–prey savanna food web to evaluate support for 2 hypotheses relating to the indirect effects of “apparent competition” and “apparent mutualism.” We examined how the presence of migratory herds of wildebeests (Connochaetes taurinus) and zebras (Equus quagga) affected survival of resident giraffe calves, as mediated by their shared predator, African lions (Panthera leo). African lions are generalist predators whose primary, preferred prey are wildebeests and zebras, but lion predation on secondary prey such as giraffes may change according to the relative abundance of the primary prey species. We found that local lion predation pressure on giraffes was reduced by local density of wildebeests and zebras, making giraffe neonatal and calf survival probabilities higher when the migratory herds were present. This supported the apparent mutualism hypothesis. Natural predation had a significant effect on giraffe calf and neonate survival, and could significantly affect giraffe population dynamics, thus if wildebeest and zebra populations in this ecosystem continue to decline as a result of increasingly disrupted migrations and poaching, then giraffe calves will face increased predation pressure as the predator–prey ratio increases. Our results suggest that the widespread population declines observed in many migratory systems are likely to trigger demographic impacts in other species due to indirect effects like those shown here.

We were proud to contribute to the IUCN Red List Assessment for giraffes, which reclassified giraffes as Vulnerable due to an observed population decline of 36–40% over three generations (30 years, 1985–2015). The factors causing this decline (direct killing and habitat loss) have not ceased throughout the species’ range. The best available estimates indicate a total population in 1985 of 151,702–163,452 giraffes (106,191–114,416 mature individuals), and in 2015 a total population of 97,562 giraffes (68,293 mature individuals). Some giraffe populations are stable or increasing, while others are declining, and each population is subject to pressure by threats specific to their local country or region. The populations of giraffes are scattered and fragmented with different growth trajectories and threats, but the species trend reveals an overall large decline in numbers across its range in Africa.

We also documented for the first time that Season of birth affects juvenile survival of giraffe. Variation in timing of reproduction and subsequent juvenile survival often plays an important role in population dynamics of ungulates in temperate and boreal regions. Tropical ungulates often give birth year round, but survival effects of birth season for tropical ungulate species were previously unknown. We found significant differences in juvenile survival according to season of birth, with calves born during the dry season experiencing the highest survival probability. Phenological match (matching birth season with vegetation growth) may explain the juvenile survival advantage to offspring born during the dry season from 1) greater accumulated maternal energy reserves in mothers who conceived in the long rainy season, 2) high-protein browse in the late dry-early short rainy seasons supplementing maternal and calf resources, 3) reduced predation due to decreased stalking cover, or some combination of these. Asynchrony is believed to be the ancestral state of all ungulates, and this investigation illustrated how seasonal variation in vegetation can affect juvenile survival and may have played a role in the evolution of synchronous births.

We also contributed to a lively discussion about How many species of giraffe are there? Giraffes are presently classified as one species, with nine subspecies. A paper in Current Biology presented DNA data and a taxonomy with four species of giraffe. The present consensus of one species divided into nine subspecies had previously been questioned several times over the past few decades. We presented the various taxonomic schemes and offered that the fundamental reason for different taxonomic interpretations is that they are based upon different datasets that adopt different statistical techniques and follow different criteria. These different taxonomies create a basis for future taxonomy discussions and conservation efforts.

Our study Seeing spots: Quantifying mother-offspring similarity and assessing fitness consequences of coat pattern traits in a wild population of giraffes revealed wild giraffe spot patterns are heritable, with elements of the pattern passed down from mother to offspring, and certain spot traits improved survival for newborns. Coats with complex patterns are found on many mammal species from anteaters to zebras, and these pelage traits are hypothesized to improve survival and reproduction by affecting predator and parasite evasion, temperature regulation, and social communication. This study was the first to examine complex mammal coat markings as individual traits that might have fitness consequences.

Together with computer engineers from Microsoft, we published An automated program to find animals and crop photographs for individual recognition. This paper describes a new image processing service using machine learning technology deployed on the Microsoft Azure cloud. Using a computer vision object detection algorithm, the Microsoft team trained a program to recognize giraffe torsos using some existing annotated giraffe photos. The program was iteratively improved using an efficient Active Learning process, where the system identified new images and showed its predicted cropping squares on these images to a human who could quickly verify or correct the results. These new images were then fed back into training algorithm to further update and improve the program.  The resulting system identifies the location of giraffe torsos in images with a very high accuracy.

Correlates of home range sizes of giraffes, Giraffa camelopardalis examined what affects the size of giraffe home ranges. We found that giraffes living closer to towns had larger home ranges than giraffes living far from towns, suggesting a need to range longer distances—and expend more energy—to obtain critical resources in human-impacted areas. No such relationship was evident with bomas, which are homesteads built by indigenous livestock-keeping Maasai people, suggesting that giraffes are tolerant of more traditional, lower-impact land uses.

In Simultaneous multiple-calf allonursing by a wild Masai giraffe, we provide the first documentation of three calves nursing at the same time from one adult female in the wild. This unusual sighting suggests that for animals that live in social groups and share in caring of young, the benefits of sometimes allowing other females' calves to nurse might be greater than the costs.
Our Scientific Publications on Giraffes: